If you are getting this error:

There was an error performing the Insert from URL HTTP Request. Error: 1627 (Authentication failed) 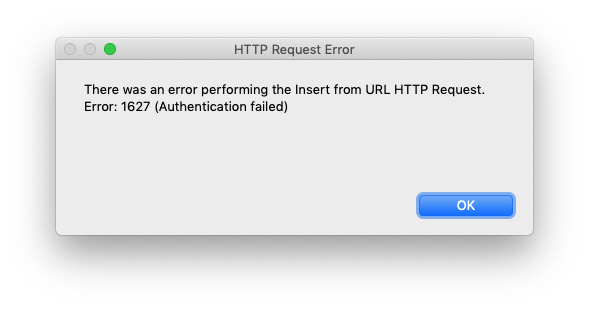 error when making a request to the WooCommerce API (e.g. attempting to download or upload data) and you are using FileMaker Pro v16 or later try disabling the option to use HTTP Basic Auth in the Setup screen:

Occasionally some servers may not parse the Authorization header correctly so try disabling this option and trying again – this switches to providing the consumer key/secret as query string parameters instead.

If you’re still having problems making requests to the WooCommerce API this article has some good suggestions for resolving common WooCommerce REST API issues. For some customers we have had to specify the UserAgent as part of each request to work around issues with some WordPress security plugins.